– Yesu Mogya, an 89-year-old Ghanaian woman who looks like she’s in her 40s has revealed the secrets to her youthful appearance

– According to her, she totally avoids envy, theft, jealousy, anger and also never eats street food

An 89-year-old Ghanaian woman called Yesu Mogya has given priceless tips on longevity and how she has been able to keep looking forever-young.

In an interview with YEN.com.gh’s Nanaday, the woman who looks as though she’s in her forties said that her grandparent lived up to 140 years and gave her tips on longevity which she has applied until now.

According to Mogya, she never holds anger in her heart, never harbours jealousy or envy in her heart, does not lie, steal or backbite. 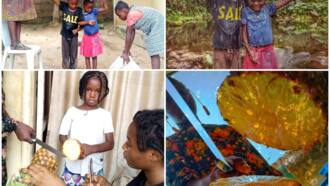 Apart from these, the 89-year-old woman mentioned that she also never eats street food as they have low quality and are usually contaminated with poisonous chemicals from their packaging.

She also amazed the viewers in the video when she said that every morning all she takes is fufu, which is a heavy Ghanaian dish prepared by pounding cassava and plantain.

The woman also shockingly revealed that her name which means ‘blood of Jesus’ came from a miracle God performed in her life when her breasts produced milk to feed her grandchild after the child’s mother passed away. In other news, social media went crazy when a Twitter user posted pictures of her beautiful mother.

User @olwethurrr shared stunning pics of her mom, captioning them: 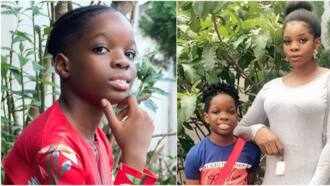 It appeared as though at the time the user posted the pictures, it was her mother’s birthday. The mum turned 45 but did not look a day over 30 in the pictures. This caused tweeps to go mad!