– The match had ended 2-2, but Marc Roca lost his spot-kick to the wild celebrations of the hosts

There were incredible scenes at the Holstein-Stadion after second division side Holstein Kiel knocked Bayern Munich out of this season’s German Cup.

It becomes the first time since 2004 that the defending champions got knocked out of the competition by a team in the lower division and the celebrations went haywire.

The loss means Bayern Munich have now lost more games in year 2021 than all they did in 2020, despite that it is just January.

But it was a hard-fought bout for the hosts to overcome the Bundesliga reigning kings after Serge Gnabry has opened the scoring as early as the 14th minute.

Holstein stunned the visitors just before half-time as they dug deep and Fin Bartels drilled home to equalise 1-1.

Leroy Sane then produced a wonderful free-kick from distance to put Munich ahead in the 47th minute.

But Ole Werner’s side once again fought back and deservedly grabbed a last-gasp goal through Hauke Wahl’s shoulder to stay in the tie deep into stoppage time; 2-2.

The DFB Pokal second round eventually went into penalty shootout and after the first 10 spot-kicks were converted from both sides, Kiel goalkeeper denied midfielder Marc Roca.

Moments later, that man Bartels slotted past Manuel Neuer to seal a historic win and the reaction afterwards was sensational.

Bayern boss Hansi Flick expressed shock at the end of the game. He said, as cited in SPORTbible:

“It’s a shock of course. We’re very disappointed; we wanted to defend the treble. Taken altogether, it was down to details, the team showed great spirit. “We were dominant, which was our aim. It’s very annoying that we conceded the equalizer in the last second.” 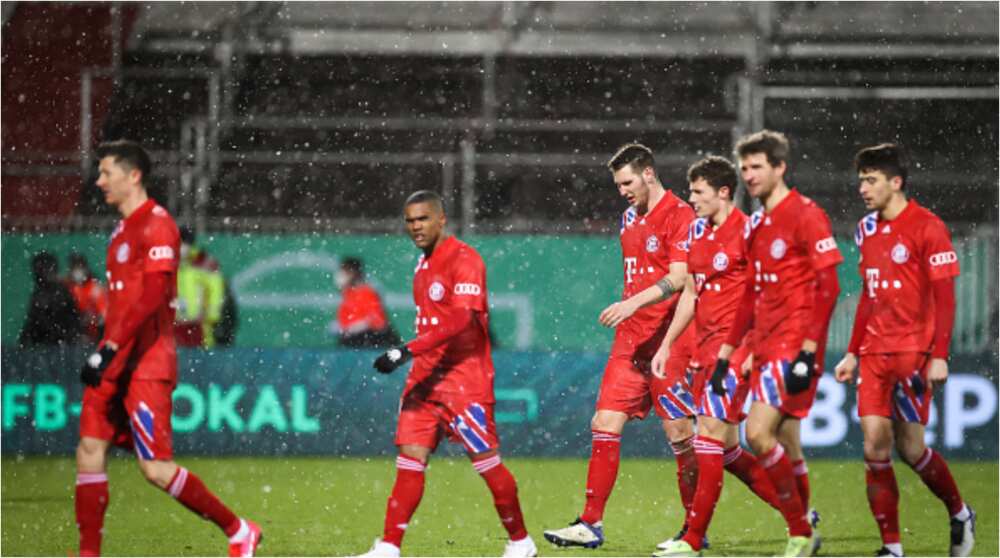