– Thirty-two states received the sum of N123.348billion grants in accordance with the results achieved

The Nigerian government has disbursed ₦123.348billion (USD324.6million)as performance-based grants to states to 32 states in the country.

In a report by The Nation, the funds were shared under the States Fiscal Transparency Accountability and Sustainability (SFTAS) Programme for Results.

Zainab Shamsuna Ahmed, the minister of finance, budget, and national planning, in a statement signed by Hassan Dodo, the ministry’s director of press and public relations, disclosed this on Wednesday, January 13, in Abuja. The federal government has disbursed a round of performance-based grants to 32 Nigerian states.
Photo credit: @ZShamsuna
Source: Twitter

The finance minister explained that the disbursement followed the achievement of results by the states in the just concluded 2019 Annual Performance Assessment (APA). 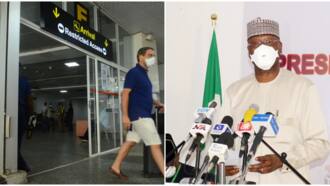 Breakdown of the sharing

Thirty-two eligible states received grants in line with the number of results achieved at the end of the 2019 APA results.

According to the minister, Sokoto state received the highest amount of N6.612billion while Kano state got the lowest amount of N1.710billion.

Bayelsa, Imo, Rivers, and the Zamfara states did not receive any allocation due to their inability to meet the 2019 eligibility criteria.

Meanwhile, Legit.ng reported that the Nigerian government at all levels, the federal, states and local governments, shared N604.004bn as federation allocation revenue for the month of October 2020.

The Federation Accounts Allocation Committee (FAAC) announced the figure after its meeting on Wednesday, November 18, 2020.

The meeting was chaired by the Permanent Secretary of the Federal Ministry of Finance, Budget and National Planning, Aliyu Ahmed.

In a related development, the Northeast Governors Forum (NGF) has expressed disappointment over the fact that the provision of N45.32 billion out of the proposed N13.02 trillion in the 2021 budget is for capital projects in the region.

The governors who made their grievances known in a communique issued at the end of its meeting on Friday, November 27, 2020, called for the execution of more capital projects next year to ensure the rapid development of the region.

Market Survey: The market is dry, everyone is broke – Market women | Legit TV