– Nigerian journalist, Kemi Olunloyo, is in the news again and this time, she has something to say about billionaires in the country

– The controversial media personality is of the opinion that music star, Wizkid, is the only real billionaire in Nigeria

– According to her, others made their money through gifts from politicians

Controversial Nigerian journalist, Kemi Olunloyo, recently took to her Twitter page to share her interesting take on some billionaires in the country.

The media personality in her tweet claimed that one of Nigeria’s top music stars, Wizkid Ayo, was the only real billionaire in the country.

Explaining further, Olunloyo said that if a president gave a person a gift that made them billions, then it was not the country’s money. Kemi Olunloyo has said that Wizkid is the only real billionaire in Nigeria.
Photos: @kemiolunloyo @wizkidayo
Source: Instagram 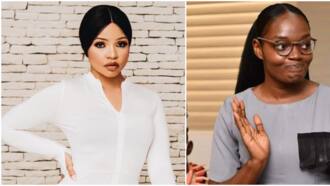 She went ahead to give examples of billionaires she felt fell into this category.

Olunloyo claimed Tony Elumelu, Folorunsho Alakija and D. Adeleke made their billions from Ibrahim Babangida, while Linda Ikeji made hers from Goodluck Jonathan and Terry Waya made his from Sani Abacha.

“If a Nigerian PRESIDENT gives you a gift that made u billions, it’s their gift NOT NIGERIA’S money.

The only REAL Billionaire in Nigeria is WizKid‼️aka Ayo Balogun”

In no time, people took to her comment section to react to the post. Read what some of them had to say below:

The Realist had this to say about Tony Elumelu’s wealth:

Regal said that Dangote was one of the biggest beneficiaries of the government:

Rachael said she prefers to be a fake billionaire to being poor:

Moses wanted to know why Olunloyo omitted Adenuga, Otedola and others:

In other news, Legit.ng reported that Nigerian billionaire businessman, Rasaq Okoya and his daughter, Raheeda, recently celebrated their birthdays.

The father and daughter clocked a year older on January 12, 2021. While the billionaire celebrated his 81st birthday, Raheeda marked her 20th.