A group, Coalition of South East Professionals Network in Nigeria and Diaspora (CSEPNND) has called on the federal government to repatriate the leader of the Indigenous People of Biafra (IPOB), Mazi Nnamdi Kanu, to face a case of an alleged treasonable felony.

The group also condemned the claim made by IPOB’s spokesman, Emma Powerful, who said the Department of State Service (DSS) sponsored its demand for Kanu’s repatriation. 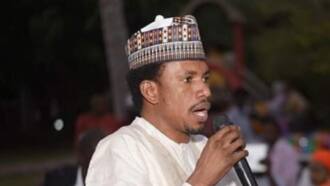 I joined APC to build a better future for my children, says Senator Abbo Kanu has spent some time in Nigerian prison in the past.
Photo credit: @CFR_org
Source: Twitter

Professor Chika said an attack on his person or group would not deter CSEPNND from clamouring for its demand.

Meanwhile, the DSS recently informed Nigerians that government and security agencies alone cannot tackle insecurity in the country without the support of the citizens, especially on intelligence gathering.

The Director-General of the agency, Yusuf Bichi, made the comment while being represented by DSS spokesman, Peter Afunnaya at an event in Abuja.

The DSS boss urged Nigerians to support the security agencies to rid the country of all forms of criminality, rather than point accusing fingers at them.

He went on to say security is no longer for government and security agencies, adding that there is a need for collaborative efforts and partnership with citizens to tame the plans of criminal gangs across the country.

Meanwhile, President Muhammadu Buhari has said that Nigerian elites are responsible for what Nigeria is and what it can become.

The president made the comment recently, adding that the fast-growing young and dynamic population of the country, feels alienated and disempowered, hence they become a threat to national stability.

IPOB: Politicians are not scared of traveling abroad, I am going to Geneva soon – Amaechi | Legit TV