– A woman, Vivan, has taken her search for her Yoruba father to Ibadan, saying knowing him is important to her mental and social wellbeing

– Though her mother is Igbo, the woman who has tribal marks said her father was denied access to her as a child

– Vivan was adopted by a chieftain, Alhaji Nureni Akanbi, as a way to give the woman a sense of belonging till her biological father is found

A woman with a maternal Igbo root, Vivan, has gone on a serious search for her Yoruba father, tracing him to Ibadan.

The woman who has a tribal mark said she has always been confused about her real ancestry, adding that she does not know whether to identify as Igbo or Yoruba, BCOS reports.

She said that this dilemma has affected her relationships and destroyed many opportunities at finding a life partner.

Please pray for me, I need a husband – Pretty lady says on social media, shares her photos

Vivan revealed that whenever a man was in a relationship with her, the question of where she belongs always came up. Her inability to give a straight answer has dealt her a big blow.

She said there were times when she alternated between being a Yoruba or an Igbo. The woman went ahead to say that she was told her father was a soldier who was never approved of by her mother’s family.

When Vivan was was little, she was forcibly taken from her father to Enugu as all connections with the man were severed.

Another interesting thing about her story was that she never knew she had tribal marks as a child because her relatives forbade her from using a mirror.

Alhaji Nureni Akanbi, the Arole Iba Oluyole, received her when she came to Ibadan and assured the lady that she will be supported by the community to search for her father known as Balogun. 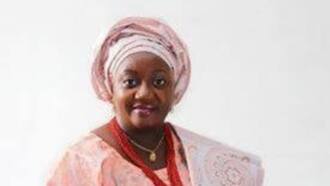 To put the woman’s heart at rest, Nureni said he will adopt her till the time her father shows up.

Meanwhile, Legit.ng earlier reported that a young lady identified as Talisa Pidanset urged people to help her locate her biological father who was refused asylum in Germany.

The 25-year-old German national said her father lived in an asylum home in Mainz. According to her, he was deported in 1996 when he was denied asylum.

The lady said her father’s files she requested for indicated that he was deported to an unknown location.