Seun Kuti is a famous Nigerian singer and one of the sons of the late musician Fela Kuti. He assumed leadership of his late father’s band when he was 14 years. He never disappointed as he has helped build it to what it is today. So far in his illustrious career, the musician has achieved a lot. He has produced numerous top-selling Afrobeat songs. This biography will give you more information about the singer.

The Nigerian singer was born on January 11th, 1983, in Lagos, Nigeria. He is the youngest son of the late legendary singer Fela Kuti, and he is seen as Fela’s anointed successor. The singer performs at “We Love Green Festival” on May 30, 2015, in Paris, France. Photo: David Wolff
Source: Getty Images

Seun became famous because of his amazing vocals and indescribable talent for playing the saxophone. Like his father, he uses his music as a tool for entertainment and political activism.

How old is Seun Kuti?

As of 2021, Seun Kuti age is 38 years. The musician celebrates his birthday on January 11th every year.

Who is Seun Kuti mother?

The singer’s mother is Fehintola Anikulapo Kuti. She is one of Fela’s ex-wives. She was married to the great singer between 1978 to 1986, and they had two children together, namely Seun and Motunrayo.

He studied at the Liverpool Institute for Performing Arts. At 19, the singer put Egypt 80 on hold and went to England, like his father, to study popular music and sound technology.

Seun became interested in music at the age of five. At 9, he expressed his profound love for music to his father when he asked to sing for him. He began singing alongside his father as a member of his band. While in the Egypt 80 band, he began showing his amazing talent for singing and playing the saxophone. 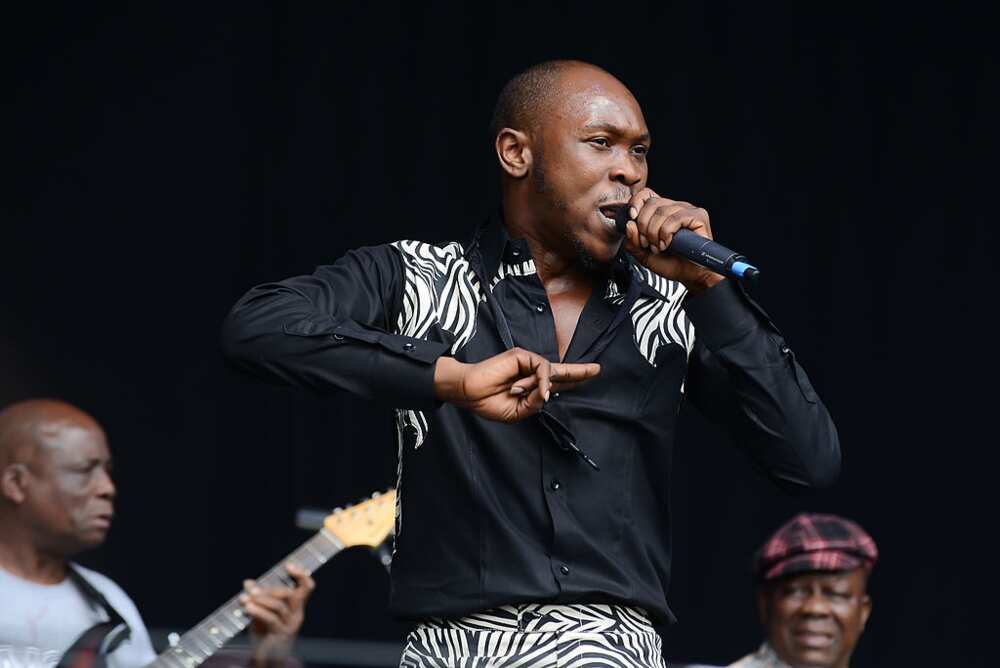 Unfortunately, Fela died in 1997 when his youngest son was only 14 years old. The responsibility of directing the band was bestowed in the little hands of Seun since his elder brother, Femi Kuti, had rejected the role. Seun then led the band on various tours globally.

The Nigerian musician released his debut album titled Many Things in 2008. The collection was hailed as one of the most exciting releases in music’s history. Two years later, he appeared in Calle 13’s song Todo se Mueve (Everything Moves) on their Entren Los Que Quieran album.

Seun is signed under the record label ‘The Knitting Factory’ and still works with some producers who worked on his father’s music. He has released several numbers, among them:

His studio albums include:

Solidstar biography: Who is the popular Nigerian musician?

In January 2012, the popular musician participated actively in the Occupy Nigeria protests. The demonstration was against the fuel subsidy removal policy of President Goodluck Jonathan in Nigeria.

The singer’s efforts have not been in vain. In 2018, his band secured their first nomination in the Grammys in the Best World Music Album category, a category reserved for international musicians whose works are indigenous and non-Western. How much is Seun Kuti worth?

The Nigerian singer is a happily married man and a father of one. Seun Kuti wife is called Yetunde George Ademiluyi. In 2020, the pair became an internet sensation when they celebrated fifteen years of friendship.

To mark the special day, the singer’s wife took to her Instagram page to explain how much the singer meant to her. She revealed that they had known each other for 15 years and that the singer had made her happy and still drives her crazy despite the long time they have been together. She went ahead to gift her man the highly sought PS5.

Interesting details about Iyanya: His age, net worth, albums, and latest songs

The overzealous singer took to his Instagram page to appreciate his wife’s gift. He wrote,

@chefyeide na since 3 days now I don sure say u love me. People Wey no get love, hmmm na die una dey ooo. The amount of living relationships I see online and the amount of Ps5 unboxing no even oooo, e no balance at all!! Don’t tell me your woman loves you, just show me ur ps5.

The couple welcomed a baby girl on December 16th, 2013, and named her Ifafunmike Adara Anikulapo-Kuti.

Is Seun Kuti an atheist?

In 2013, the Nigerian singer revealed to his Facebook followers that he believed in the Traditional African Religion and not the ‘imported religion’. In what could be seen as a way of expressing his feeling about religion, the musician wrote,

The only religion in Africa with a unified doctrine is the Traditional African Religion and yet it is the evil one. The imported religion do not even accept among themselves what their god says to do or don’t do, and they’re the good guys. I am happy I am an atheist!

Like most celebrities, the Nigerian singer enjoys an incredible following on social media.

Seun Kuti is, without a doubt, one of the most celebrated Nigerian singers today. He has produced several albums under his band called Egypt 80. He is indeed a voice to reckon with among numerous artists worldwide.

Legit.ng recently published an article on the biography of Anna Maria Sieklucka. She is a Polish celebrity who came to the limelight because of her impressive performance in 365 Days.

Anna Maria Sieklucka’s talent has earned her an incredible following from across the globe. Her detailed biography will help you understand who she is.