– Olorunnimbe Mamora, the minister of State for Health, has spoken about the large crowd gathered at NIN centres

– The minister disclosed why such large gatherings could have help implications

The minister of state for health, Olorunnimbe Mamora, has said the federal government may suspend the ongoing National Identification Number (NIN) enrolment.

Mamora told Channels TV on Monday, January 11, that the exercise may be suspended due to large crowds which and the NIN centres and the risks posed by COVID-19.

He said the large crowds that have thronged the NIN registration centres across the country is a cause for concern. The federal government has mandated all SIM cards in the country to be linked to the NIN.
Photo: Vanguard, The Guardian
Source: UGC

The minister stated that the gatherings at the NIN centre are like a super spreader event. 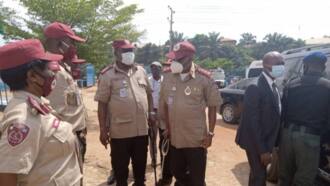 If you want to get this important document, you must provide NIN – Another govt agency announces, releases enforcement date

“My understanding is that the whole process may be suspended so as to reorder the whole process in terms of management of the crowd because it was never intended that it would become a rowdy process like that. So, people may have to wait and be called at intervals to go through the process.”

The minister also urged the National Identity Management Commission (NIMC) to re-order the enrolment process to avoid large crowds at its centres nationwide.

He said the government has a duty to ensure Nigerians are protected at all times.

Meanwhile, in another consolidated effort towards encouraging Nigerians to enrol for the NIN, the NIMC disclosed that it has launched a mobile app to aide registration.

The technical assistant, information technology to the Ministry of Communication, Femi Adeluyi, made this known in a statement issued on the night of Thursday, December 31, 2020, in Abuja.

He said the development was part of the federal government’s policy to improve the process of obtaining NIN and linking it to Subscribers Identification Module (SIM), and also aligning with the national digital economy policy for a digital Nigeria.