– According to the party leaders, Ekiti South senatorial district must produce the next governor

Ahead of the 2022 gubernatorial poll, Olujimi has been urged by stakeholders of the PDP in Ekiti South senatorial district to contest for the governorship election.

Stakeholders of the opposition made this known at the end of a meeting held by party chieftains from the six local governments in the district at Omuo-Ekiti in Ekiti East local government on Sunday, January 10, The Nation reports. 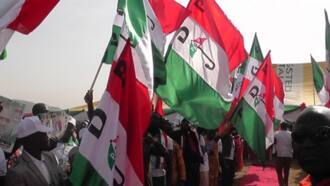 Trouble for PDP as thousands of loyalists denounce membership, defect to APC ahead of 2023

Party members at the meeting convened by Chief Nelson Shaba, a PDP leader explained that the appeal became necessary to ensure that the district produced a governor. Ekiti state chapter of the PDP have called on Senator Olujimi to contest for the 2023 presidency. Photo credit: @olalekanayeni21
Source: Twitter

According to the PDP leaders, Ekiti South in the spirit of fairness and equity must produce the next governor of the state, adding that the agitation for the agenda was long overdue.

Legit.ng had earlier reported that the former Senate minority leader in Ekiti predicted what will ruin the chances of the PDP in the forthcoming governorship election in the state.

The lawmaker said that until the leadership of the PDP at the national level deals with the issue of injustice, the state chapter of the party will remain doomed to failure.

She alleged that the illegality that characterised the congresses in state and wards have ruined the Ekiti PDP. In light of this, the senator vowed to continue in her struggle alongside some other bigwigs to revive the party and reposition it for victory ahead of the poll.

In a related development, the crisis over the control of the PDP in Ekiti state has taken a dramatic turn as Olujimi dusted off defection rumour.

The former Senate minority leader was said to have been planning to dump the opposition party for the APC because of state former governor, Ayodele Fayose.