– Frank Lampard’s job as Chelsea boss is still under threat

Frank Lampard guided Chelsea to their first victory in the New Year following their 4-0 FA Cup triumph over lower league side Morecambe over the weekend.

A goal each from Mason Mount, Timo Werner, Callum Hudson-Odoi, and Kai Vertz powered the Blues to the next round of the competition.

However, this does not absolve them of their struggles in the English Premier League as they sit ninth on the table with 26 points after 17 rounds of games. 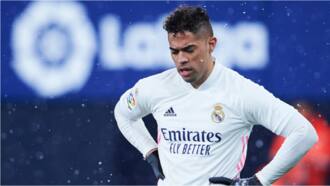 Their meeting is against Fulham at Craven Cottage and an unfavourable outcome might be damning on Lampard’s job. Meanwhile, the 42-year-old has been voted the most trolled Premier League manager this campaign as reported by SunSport quoting RantCasino.

This rating was arrived at after thousands of posts were analysed to find out which manager is trolled the most on Twitter.

The Blues boss finished top of the chart with 42 per cent (365 votes) while the most common emoji used in the tweets including Lampard’s name was the crying face.

That could be down to the fact that Chelsea have lost four of their last six league matches.

Legit.ng earlier reported that FIkayo Tomori may be sent on loan this transfer window according to Chelsea manager Frank Lampard. 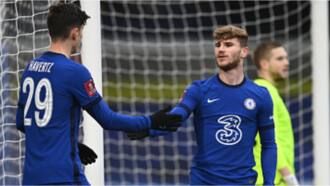 The 23-year-old defender fallen down the pecking order since the arrival of Thiago Silva in the summer and has managed just one Premier League appearance this campaign.

While at other times, he could not even make the matchday squad and he has been linked with a move to top Premier League clubs.