– The government agency building was hit by the fire on Sunday, January 10, with offices left in ruins

Some offices were affected by a fire outbreak at the headquarters of the Nigerian Immigration Service (NIS) in Abuja on Sunday.

Confirming the development, the NIS in a tweet shared on its official Twitter account said the fire has been put out by the Federal Fire Station with support from other agencies around the airport.

According to the post, the incident occurred Sunday morning and affected some offices. The NIS went on to note that an investigation into the incident. 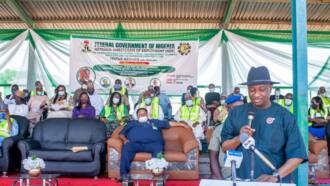 Buhari government has done it for Nigerians again, employs many