Premier League club Arsenal have announced the signing of Hertha Berlin centre-back Omar Rekik in a deal of around £540,000.

The 19-year-old became the first Gunners signing since the start of the winter transfer window this year and he has been sent to their U23 team.

Before his move to the North London club, he has had periods with the youth sides of Feyenoord, PSV, Manchester City and Marseille.

Spanish-born manager Mikel Arteta confirmed the player already penned a professional contract during his press conference earlier this week adding that he will be unveiled soon. 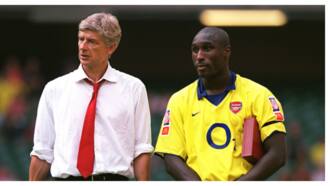 Omar Rekik posing in front of the Arsenal logo after joining them from Hertha Berlin.
Credit: Twitter @afcstuff
Source: Twitter

“He’s a young talent that we’ve been following for a while that we believe has a really bright future.”

The youngster was an unused substitute in three Bundesliga matches last season games for but he is yet to make any senior debut in his career. While reacting to his new day, Rekik said:

“It feels great to be here after a long time of hard work. It feels great. I moved in three weeks ago and I’ve been in quarantine, so I can’t wait to get started,” Rekik told Arsenal’s website.

“The warmth of the people and the interest that they showed in me, and of course, when a club like Arsenal is interested, I don’t think anyone needs to think twice.

Legit.ng earlier reported that Arsene Wenger has revealed that Sol Campbell was booed in training by his teammates to help him prepare for the north London derby against Tottenham.

The center-back started his career with Spurs and spent nine years at White Hart Lane before joining London rivals Arsenal in 2001.

Wenger did not make his bid for the former England defender public due to the negative reactions the player was likely to face from rival fans.