Still begrudged by the outcome of the November 3 presidential election, President Donald Trump set the record straight for those who care to know that he will not be attending the inauguration of Joe Biden as the next president of the United States.

Biden’s official swearing-in after his victory was certified by the US legislative chambers on Thursday, January 7 –despite the attack on the Capitol Hill — is slated for Wednesday, January 20.

In a historical chain of tradition that is set to be again broken, Trump pulled the trigger in a Twitter rant on Friday, January8, as he said he will not be available for the inauguration, though the embattled president earlier promised he would ensure a smooth and orderly transition into the new presidency. 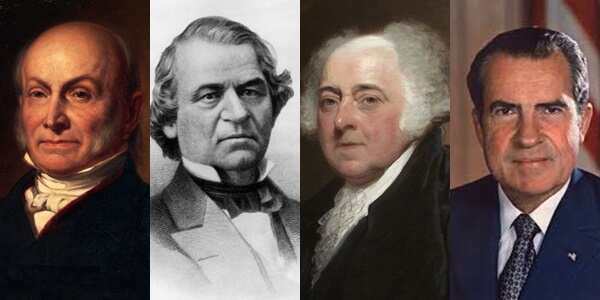 Fours US presidents who skipped the inauguration of their successors as Trump joins on January 20.
Photo credit: CNN
Source: UGC

“To all of those who have asked, I will not be going to the Inauguration on January 20th,” Trump said in delusional claims of victory

With less than two weeks for Trump to vacate the Oval office amid his continued calls for “justice” over the November 3 presidential contest, Legit.ng outlines US presidents in history who failed to honour the inauguration of their successors.

After resigning his position (he is the only president to resign), former president Richard Nixon left the White House when his successor and vice-president Gerald Ford was sworn in.

At 9:30 a.m. August 9, Nixon and his family entered the East Room of the White House where he delivered his final address as president.

He said: “we leave with high hopes, in good spirits and with deep humility, and with very much gratefulness in our hearts.”

Johnson, the 17th president of the United States, refused to attend his successor, Ulysses S. Grant’s inauguration at the U.S. Capitol which was held on March 4.

Instead, he stayed at the White House to sign “last-minute legislation,” according to the Library of Congress.

Johnson, the first president to be impeached, was sworn into office in 1865 following the assassination of Abraham Lincoln. But his party declined to nominate him for the 1868 election.

Adams, the US 6th president, didn’t attend the inauguration of his successor, Andrew Jackson, and the reason was not given.

Adams officially left the White House on March 3, the day before Jackson was sworn in.

Like his son, John Adams did not attend the inauguration ceremony of his successor, Thomas Jefferson.

He, instead, left the White House at 4 a.m the day of Jefferson’s swearing-in ceremony, according to The White House Historical Association, marking the first time presidency was handed over to the opposition party.