– During their reign, Chelsea possess, arguably the best midfield in the English top-flight

John Terry has taken a swipe on former team-mate Mikel Obi over the Nigerian’s first goal for the Blues during his time at the Stamford Bridge club.

Both players combined well the midfield at Chelsea for 11 years winning several trophies together before the pair departed in 2017 recpectively.

During his time at the club, Mikel scored only one goal in the Premier League despite playing a staggering 249 matches, although he had five more goals from other competitions.

Chelsea posted the clip of his frst ever goal for the club to mark the 13th year anniversary of the strike which sent the entire fans at the Stamford Bridge into the wilds. He scored his first goal for Chelsea in their 6–1 FA Cup victory over Macclesfield Town on January 6, 2007 and Chelsea celebrated such sensational volley on social media.

John Terry then added a comment: “First and last goal, miss you mate,” and in a swift the Nigerian responded: “Not my last old boy, but definitely my best; miss you too.” 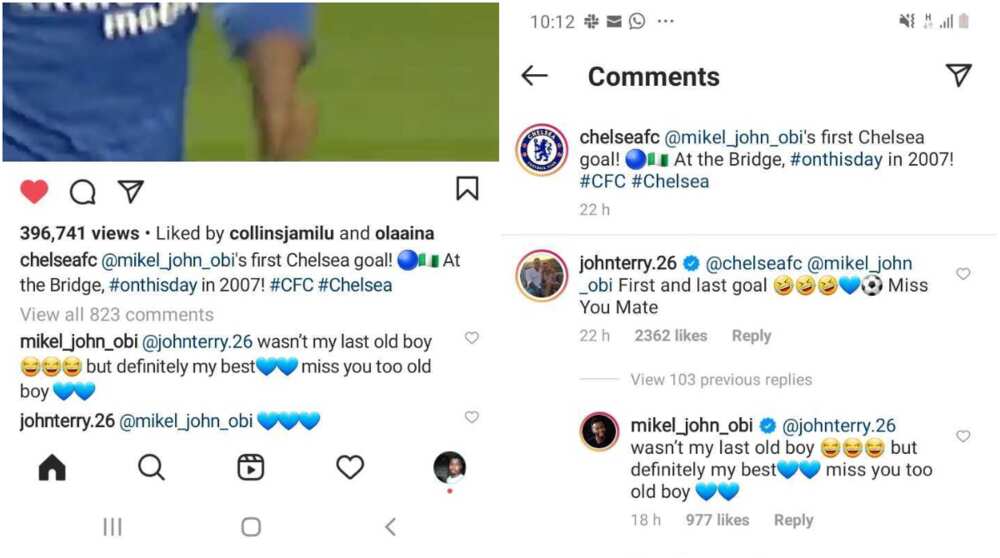 John Terry takes a swipe on Mikel over one of his Chelsea goals. Chelsea FC
Source: Instagram

However, Mikel Obi’s only Premier League goal came on September 21, 2013, during the Blues’ 2–0 win against Fulham.

It came in the 84th minute of the encounter as the ball found its way to the Nigerian who acrobatically right-footed the ball into the net to ensure his side picked all three points at home.

He played over 370 matches for the Blues in all competitions before joining Chinese Super Eagles side Tianjin Teda on a brief spell.

The former Nigerian international is currently plying his trade at Britannia, home of the famous red and white club.

The 33-year-old will be Stoke’s fourth signing after Morgan Fox, James Chester and Steven Fletcher and the club are delighted to announce his arrival at the bet365 Stadium.