– A former president, Olusegun Obasanjo has shown that he takes exercising seriously

A footage of former president, Olusegun Obasanjo, doing some workout while dancing to music playing in the background has generated massive reactions from Nigerians.

The 83-year elder statesman who was adorned in a face cap, trousers, and white sneakers was seen in the video moving to the rhythm of the song. 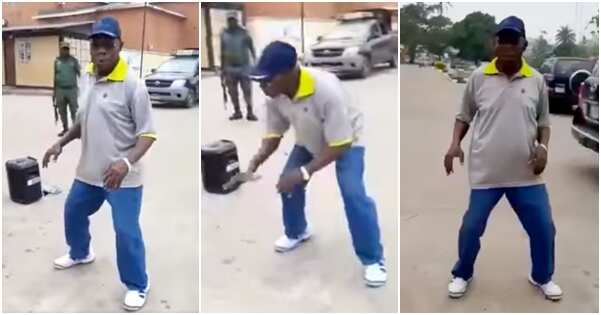 Obasanjo showing Nigerians that he is still full of vital energy.
Photo: The Cable
Source: UGC

The clip showed that the former president was joined by other men and women in what appeared to be a group workout session.

The former president was seen displaying different workout positions while his co-workout participants hailed him.

The time and place where the video was recorded were not disclosed. 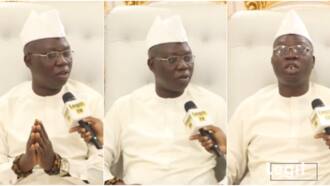 Gani Adams spits fire, says those criticising him over his ordination as apostle may not even make heaven (see video)

The video of the session instantly got some Nigerians discussing it on social media.

“Baba has a way of making us remember he is still here and active, with different vibes- If he is not writing letters, he is giving us dancing steps . I pray for continuous good health for him. Naija kan, Alaremu kan!”

Another Facebook user, Slycon Nnaemeka expressed his respect for the formder president.

“Correct Baba, Who God bless no man can curse. more respect and love from me to you Sir.”

“He has now understood that life more better than it is. I like the way he does things no forming just being himself.”

Others even suggested that the elder stateman is strong enough to govern Nigeria again.

The man still get strength to be president for 8yrs. I just love this man.”

The man after my own heart I wish you long life and nothing do you cus na baba me want to marry make no devil stop me ooo.”

The video of Obasanjo’s workout was shared by The Cable as seen below:

In another news, Obasanjo has urged all who survived 2020 and made it to 2021 to show gratitude to God.

According to the former president, though 2020 was a tough and challenging year, Christians will be failing in their duties if they refuse to give thanks to God.

The Cable reported that Obasanjo stated this at the second annual thanksgiving service of the Ogun state chapter of the Christian Association of Nigeria (CAN) in Abeokuta, the state capital.