Africa’s most expensive footballer Victor Osimhen has defended himself after being accused of attending a controversial party while on Christmas holiday in Nigeria.

The aftermath saw him test positive for deadly coronavirus which meant he would be isolated for a period of time to recover in return to Naples.

Osimhen was spotted spraying cash on the performer in a video clip without adequately protecting himself. The 21-year-old striker told Omasports during an interview and reported by Football Italia. 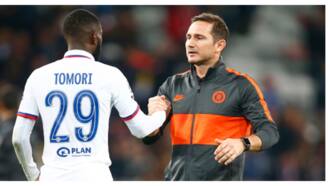 “Before I went to Nigeria, I told my sister that I wouldn’t celebrate my birthday. Victor Osimhen during Serie A game between Napoli and Bologna in November 2020.
Photo by Alessandro Sabattini.
Source: Getty Images

“I was not in the right mood because of my injury. On that particular day, I had been asleep for about six hours. When I woke up, my sister asked me to go downstairs.

“If you check what I put on, I was wearing the training jersey. I wouldn’t wear that for my birthday party. I wouldn’t dress so casually.

“I could celebrate my birthday in other ways too, but I wasn’t in a good mood. I went downstairs and they were playing music, gospel.

“I was down there for about 10 minutes before my older brother called me back upstairs. I didn’t throw a party.

“After I tested positive for COVID-19, I called my family and told them to get tested. All of them have done it and they tested negative.”

Legit.ng earlier reported Nigeria international Victor Osimhen who plays for Napoli has been spotted spraying a music performer cash in what was a joyous momentum.

But the video which has gone viral on social media did not reveal if what Victor Osimhen was spotted doing was recent or years back.

There have been reports that the Super Eagles striker could have sprayed the music performer the money on December 29 which was the day of his birthday, but there is no actual clarification.