– The influencer identified as @volqx stated that whatever BBNaija ex-housemates, Kiddwaya and Erica show to the world that they have is not genuine

A young man recently got people talking on social media after he revealed that BBNaija reality stars Erica and Kiddwaya did not share a genuine bond as their fans assume.

According to the tweet @volqx shared, he noted that the stars became serious the moment they realized that they could not sustain fans individually, hence the need to make people think they are truly together. He continued by saying that everything the ex-housemates do is for traction and news and he always thought long and hard over the fact that someone would be on their bed praying and hoping that the duo eventually become husband and wife. 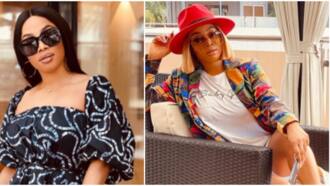 “Kiddwaya & Erica got serious the moment they realised that without each other they would struggle to sustain fans. Everything was/is for the News, everything is for traction. The fact that someone would be on their bed praying & crying that the duo get married keeps me thinking.”

The statement did not go down well with a lot of people especially fans of the reality stars.

“Lol, Erica Nlewedim or Another one? Is it Madness, Malaria or Covid?”

“This tweet isn’t it at all. You know this year produced 4/5 potential couples and in and out of the house they haven’t claimed to be in a relationship. They’re all still together, still friends as they claim but it’s only Kidd and Erica that got serious because of fans? dfkm.”

“Some of you will just open ur mouth n say rubbish..Erica has a huge fanbase..so which one is struggling to sustain fans.”

In other news, Legit.ng earlier reported that Erica Nlewedim took to social media to bless a baby girl that was named after her by one of her fans.

The fan with the Twitter handle @leyonahh shared a picture of the baby’s hand and stated that she named her after the Big Brother Naija star because of the love she has for her.