– As soon as he got into his vehicle, he put the car on reverse and trouble started for him at this point as he got stuck in snow

A black man in Canada has been arrested by the police after trying to rob a home. In a video making the rounds on social media, the thief could be seen trying to break into an apartment but took to his heels after realising that the owners were at home.

After getting into the car he had parked in the driveway, he put the vehicle on reverse and got stuck in snow. This is where trouble started for the young man. He tried driving the car out of the snow but all to no avail. Then he got out of the car to clear the snow with his hands but the car still wouldn’t move.

Frustrated and confused as to what next to do, the man tried pushing the car but couldn’t move it.

The couple could be heard in the background as they took recording of the event. The husband husband told his wife to call the cops. 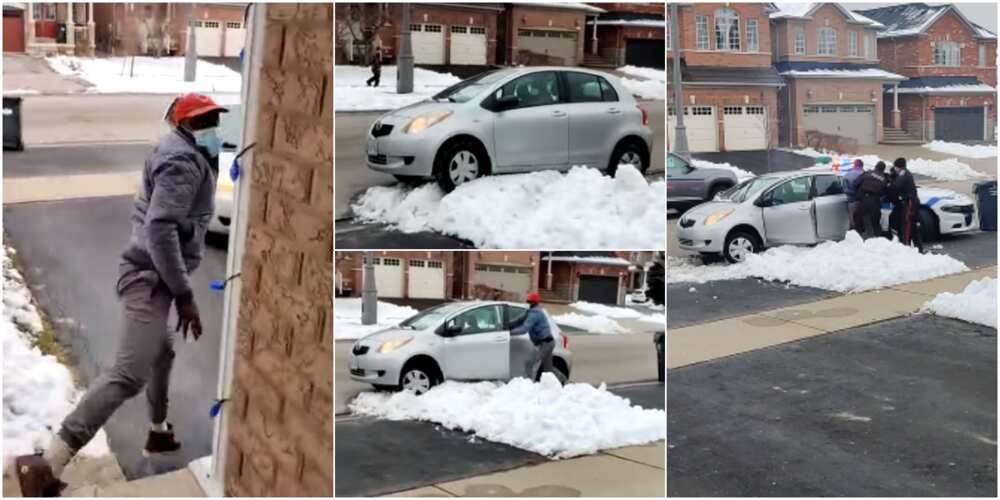 Things fell apart for the thief after his car got stuck in snow while trying to escape.
Photo credit: Horace Dockery
Source: Facebook

Feeling pity for the thief, the husband asked the thief if he needed a shovel to clear the snow so he could escape. The wife called the police and within a few minutes, they showed up to arrest the thief.

Facebookers flooded the comment section of the post which was shared by a user identified as Horace Dockery.

“He’s needs to find a new line of work, as this one is not working for him at all.” This man rides bike over long distance to return lost wallet to owner who’s been looking for it, shows act of kindness