A team of medical scientists from the World Health Organisation (WHO) sent to investigate the origin of COVID-19 in China has been denied entry into the nation.

A report from WHO claimed that this restriction was the result of lack of visa clearances, Yahoo News reports.

However, the organisation’s chief, Tedros Adhanom Ghebreyesus, expressed disappointment over the fact that China is yet to conclude arrangements for the team’s arrivals at a time when two of its members have already set out on their journey. 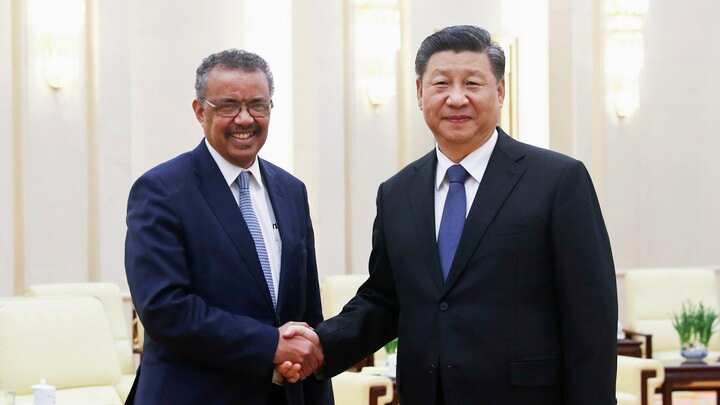 The Asian government is yet to allow WHO’s investigative team enter its borders
(Photo: @WHO)
Source: Twitter

Having been in talks with top Chinese officials, Ghebreyesus stressed that the mission is a priority for WHO and the entire world.

Before this, the mission had been agreed upon by Beijing late in 2020 following a series of consultations and negotiations with WHO.

Meanwhile, a doctor from China’s Wuhan city whose skin pigmentation changed while receiving COVID-19 treatment made his first public appearance on October 26, 2020, after his skin colour returned to normal.

Yi Fan, who was a cardiologist at Wuhan Central Hospital, contracted COVID-19 in January while treating patients at the hospital.

Yi Fan’s abnormal skin tone was reported to have been caused by an antibiotic drug he had taken during intensive care.

The 42-year-old medic appeared at the Wuhan’s Taikang Tongji Hospital on Monday, October 26, after resting at home for over five months.

A video showed the medic looking like his old self, in good spirits, and a face mask. According to reports, Fan visited the facility to thank the doctor, Wang Chen, who saved his life.