With less than 17 days to the inauguration of Joe Biden as the next American president, the Democrats secured another major win as Nancy Pelosi won the reelection as the speaker of the House.

In a report by Time, Pelosi was narrowly reelected speaker of the US House of Representatives for the fourth time on Sunday, January 3. She is the only woman to be speaker of the US chamber and has led her party in the House since 2003. The congresswoman accepted a fresh two-year term as McCarthy will also serves as the chamber’s minority leader again. 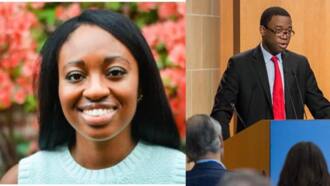 Pelosi who is now in her fourth term as speaker also made history in 2007 when she was elected the first woman to serve as speaker of the House. She had previously served as House Democratic Whip.

Meanwhile, Legit.ng reported that a Nigerian man identified as Nnamdi Chukwuocha has won his re-election to the Delaware state House of Representatives.

Chukwuocha ran on the platform of the Democratic Party in the United States general election, joining other Nigerians that were victorious at the poll.

In a related development, US president-elect Joe Biden has appointed Nigerian-born Osaremen Okolo as one of his advisers on COVID-19.

Okolo, who is a daughter of Nigerian immigrants, was appointed on Thursday, December 31, as one of the members of the Biden-Harris COVID-19 response team. With her appointment, the Nigerian-born American becomes one of the first 100 White House appointees that will work with the president-elect when he finally takes over the Oval Office on January 20.