– Latest to lend his voice to the discussion is Femi Okurounmu, an ex-lawmaker, who thinks Nigeria is sick and needs fixing

– Okurounmu believes that if any of the two parties keep ruling, the country will be moving from “frying pan to fire”

A former senator who represented Ogun Central from 1999 to 2003, Femi Okurounmu, has shared his opinion about President Muhammadu Buhari’s New Year message.

According to him, Nigeria is sick and neither the Peoples Democratic Party (PDP) nor the All Progressives Congress (APC) can heal her.

The ex-senator who served on the platform of the Alliance for Democracy (AD), via a Zoom call to the AIT morning broadcast of Kakaaki, from the United States, noted that Nigeria’s healing will come from a new breed of young people. 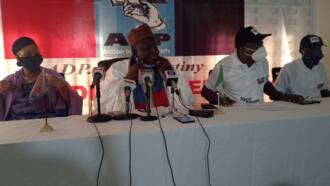 North Central should produce Nigeria’s next president in 2023, says Sani

He added that these young ones would steer the affairs of the country going forward, according to a report on The Sun.

The former senator said the country will go from bad to worse should either the APC or the PDP continue to rule Nigeria. Senator Femi Okurounmu said the youth should be given the opportunity to lead.
Photo credit: The Sun
Source: UGC

He further stressed the need for a new political party which will be made up of new persons who have viable and feasible ideas to lead the country to greater heights.

“The country is sick and we need healing.”

The ex-senator is not in support of the 36 state structure Nigeria currently runs. He advised that the country goes back to the 12 states General Yakubu Gowon created. His reason for saying this is that managing 36 states is too expensive.

In his message to citizens, the president made lots of promises including the reorganisation of the country’s security architecture.

However, a number of people were not optimistic about it and expressed as much on social media. Others, on the other hand, said there was still hope.

“We have lost hope in him and his administration, he has nothing to offer again as a leader.”

“PMB welcome to 2021. Your project this year should be how to redeem the larger life expectations Nigerians earlier have for you. And it requires less talk but actions and it doable if you want by your very own convictions not that of the hypocrites around. We are waiting. The failures or successes will be ascribe to your name. Nigeria desires the best give it all. Allah the beneficent and merciful be with you.”