Liverpool boss Jurgen Klopp has confirmed that defender Joel Matip will be out of action for at least three weeks following a groin injury.

The Cameroonian had a knock during their 1-1 draw with West Brom on Sunday night, December 27, in a match Semi Ajayi cancelled out Sadio Mane’s first-half opener.

Matip went down on the hour-mark in the cause of the game and was immediately substituted, with Jurgen Klopp replacing the player with Rhys Williams.

This is a big blow to the reigning Premier League champions who are already without defenders Virgil van Dijk and Joe Gomez who are battling with long-term injuries.

In confirming Matip’s status, Klopp said, as cited in GOAL:

“The normal situation with this kind of injury is around about three weeks.”

The tactician however expressed delight as Thiago Alcantara made his first appearance in more than two months and the Reds suffered no new injury concerns. He added:

“Thiago is a super player. From the 20 minutes he played, 12 were brilliant and then he felt the intensity, which is normal. He trained only twice around the team, so there is still some physical work to do, still some rhythm to get.

“The best news is that the boys are back, and as far as I know in the moment, nobody got injured tonight which is very important. Probably, we can go with the same squad to Southampton.” 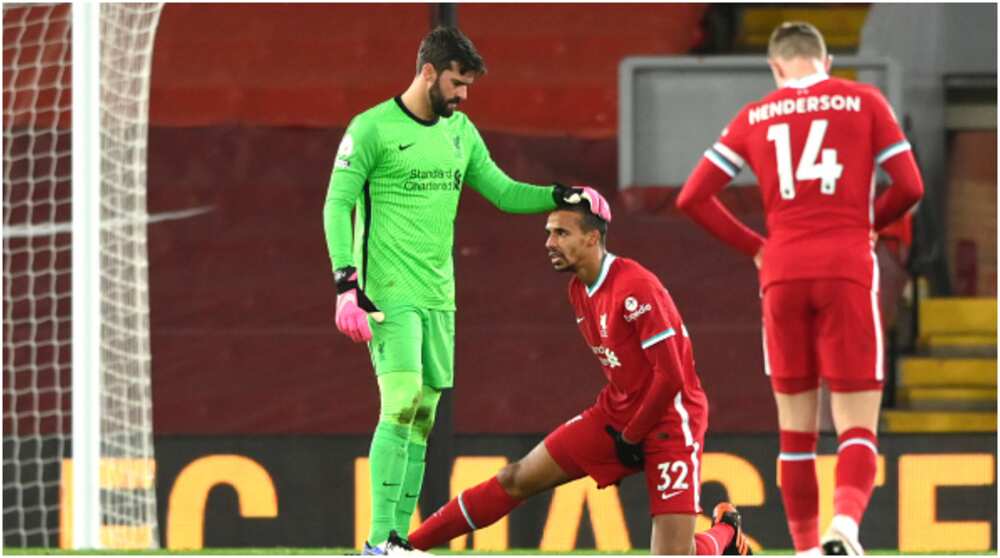 Liverpool then went three points clear at the top of the Premier League after a frustrating 0-0 stalemate against a determined Newcastle United side on Wednesday, December 30. The Reds were guilty of lacking a cutting edge in front of goal for large parts of the game, with Newcastle goalkeeper Karl Darlow coming up with some superb saves to keep his side in the game.

Meanwhile, Legit.ng earlier reported that Philippe Coutinho has joined Lionel Messi on the sidelines after limping off the pitch in Barcelona’s last game of 2020.

The Brazilian was replaced by Miralem Pjanic in the 66th minute of their 1-1 draw against 15th place Eibar at Camp Nou earlier this week.

He will now undergo surgery a few days from now as confirmed by the Catalan club but his likely return date was kept out of the information released by the club.