Apart from the COVID-19 pandemic which tragically characterised 2020, the year will also be remembered for taking the front aisle in the list of high-profile scandals involving prominent former and current Nigerian officeholders and politicians.

And as part of the Year in Review, Legit.ng outlines some of the scandals that shook the political space accompanied by long sustained discussions.

In July 2021, the Niger Delta Development Commission (NDDC) was enmeshed in corruption saga after the agency was said to have siphoned billions of naira following an established finding by the members of the National Assembly.

After weeks of altercations between the House and Senate committees on Niger Delta affairs and leadership of NDDC led by Professor Kemebradikumo Pondei, President Muhammadu Buhari was urged to sack the agency’s interim management committee. 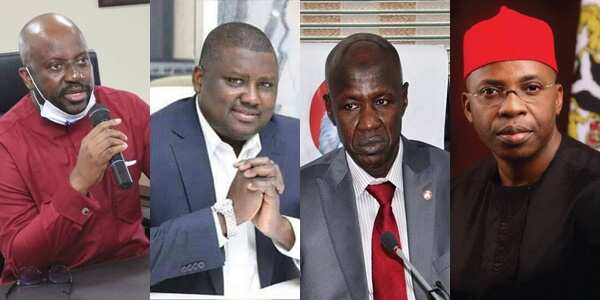 The Senate called for the IMC dissolution during a plenary on Thursday, July 23, after the probe panel led by Senator Olubunmi Adetunmbi said it discovered various financial infractions and reckless spendings in the account of the commission.

The highlight of the scandal was when Professor Pondei slumped while being grilled by the investigative panel.

The chairman of the Economic and Financial Crimes Commission (EFCC) was embroiled in a corruption scandal following a memo to President Muhammadu Buhari indicting him.

He was later summoned on Monday, July 6, by the operatives of the state security services for interrogation before being detained on a presidential directive.

The anti-corruption czar was temporarily given a marching order from his position and has since been in the dragnet of the special probe panel led by former justice of the appeal court Ayo Salami.

On Friday, November 20, Justice Salami-led panel submitted its report on Magu to President Buhari after months of allegations and counter-allegations.

Abdulfatah Ahmed, the immediate past governor of Kwara state, was invited by the EFCC for interrogation over mismanagement of public fund and controversial transaction.

The former governor in a tweet on Tuesday, December 8, said he honoured the invitation of the zonal office of EFCC in Ilorin, the capital of Kwara state, adding that the invitation was to clarify specific transactions and decisions taken while steering the ship of the state.

Maina was returned to prison following his arrest, all thanks to the collective efforts of the Nigerian police and the authorities in Niger Republic where he ran to, months after jumping bail.

A former chairman of the now-defunct Pension Reform Task Force Team (PRTF), Maina is facing a 12-count money laundering charge levelled against him and a firm by the EFCC.

He was made to face and continue his trial on Thursday, December 10, where he collapsed at a Federal High Court sitting in Abuja.

That, however, did not stop him from being sent back to jail as his trial continues.

In March 2020, an online publication Sahara Reporters claimed that Speaker Femi Gbajabiamila organised a massive birthday bash for his mother in the United Arab Emirates which was attended by the creme-la-creme of the society.

The publication also claimed the Lagos lawmaker spent approximately ‘N68,796,000’ to convey all the invited guests to the oil-rich country apart from ‘$292,800 (N105,408,000)’ marked out for the guests’ accommodation ‘in Conrad Hilton Hotel on Sheikh Zayed Road.’

But in a reaction, Gbajabiamila described the report as ‘categorically false’, adding that no public funds were appropriated or expended.

Gbajabiamila confirmed that he was truly in Dubai for the birthday of his mother but with just a few childhood friends and family members.

In September a former governor of Imo state, Ikedi Ohakim, was hit by fraud scandal as he was prosecuted by the police for allegedly using the name of the minister of works and housing, Babatunde Fashola to defraud unsuspecting Nigerians.

The charge marked CR/993/2020 and dated September 23, 2020, alleged that Ohakim gave false information against one Chinyere Lilian Amuchienwa. The case is still in court.

In a build-up to the Edo state governorship election in September, Governor Obaseki was hit by certificate scandal with the opposition party, the All Progressives Congress (APC) claiming the governors’ certificate contained errors.

Obaseki was, however, saved as he was confirmed as a graduate of the University of Ibadan (UI) by authorities of the institution.

The registrar of the institution, Olubunmi Faluyi, in a statement on Wednesday, June 10, said Obaseki gained admission to the university in 1976 and graduated in 1979.