Bukola Saraki, former Senate president, has opened up on why the upper chamber refused to confirm the appointment of some of the names sent to the red chamber by President Muhammadu Buhari.

Responding to a tweet by a media mogul Dele Momodu on Wednesday, December 30, Saraki, who served as the chairman of the 8th National Assembly (NASS), said the Senate’s refusal to confirm Buhari’s appointees was “never about a personal agenda.”

The Peoples Democratic Party (PDP) chieftain, however, said the decision was solely based on the interest of the country.

Saraki further disclosed that the Senate “did our due diligence”, hence the reason for refusing the confirmation. He added that the NASS under him was focused on how to tackle the security challenges in the country. Bukola Saraki says the 8th NASS wanted the best for the country, hence the refusal to confirm some appointees of the president.
Credit: @bukolasaraki
Source: Twitter

“When we didn’t confirm certain appointees, it was because we did our due diligence. When we invited the IG and the security chiefs, it was because we wanted to find solutions to the issues of insecurity at the time. It was never about a personal agenda. It was always about Nigeria!”

Saraki also stressed that there was no decision made by the Senate that was not in the interest of the country.

“As I used to emphasize during our conversations while I was President of the 8th Senate, the decisions that we took, the positions we adopted, and the interventions that we embarked on were in the interest of the nation.” 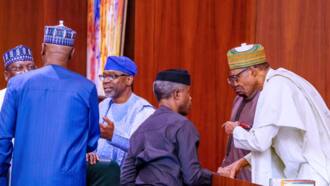 These people are planning to remove Buhari, replace him with Osinbajo – APC group alleges

Meanwhile, the chairman of the 9th NASS, Ahmad Lawan, said he accepted the label of the assembly being a rubber stamp if it would guarantee good governance for Nigerians.

Lawan stated this on Monday, October 6, at the two-day joint executive-legislative retreat with the theme: “Promoting effective, legislative partnership and finding a middle ground,” held at the Presidential Villa, Abuja.

The Senate president stressed that the NASS decided quite early to work with the executive very harmoniously for the benefits of Nigerians.