– According to her, some people are trying to kill the singer and it is time for him to lay low

Nigerian journalist, Kemi Olunloyo, recently caused a bit of panic on social media after she claimed that someone was trying to kill popular singer, Davido.

The controversial media personality’s claim seemed to stem from Davido’s recent scuffle with another singer, Burna Boy, in Ghana.

Further in the tweet, Olunloyo claimed that the only person who could tell the public what happened at the nightclub was already dead and that it was time for the singer to slow down and stop chasing clout. Journalist Kemi Olunloyo has warned Davido to be careful, claims someone is trying to kill him.
Photos: @kemiolunloyo @davido
Source: Instagram

In another post, Olunloyo said that the music industry is a very wicked one and told Davido to stay indoors and to also contact the police.

The journalist added that the singer was a father of little kids and this matter is not about his mansion in heaven or his father’s money.

It is no longer news that all is not well between Davido and Burna Boy. The duo has been known to shade each other on social media and leaving fans to pick sides.

Well, it seems their bad blood recently left social media space and became physical after they were together at the same nightclub in Ghana.

Things seemed to have gone down as eyewitnesses took to social media to share their own account of the situation. 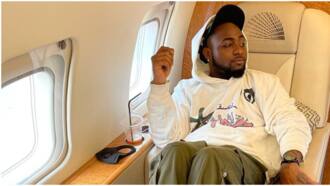 Davido speaks up again, says he has been fighting hate for 10 years, retracts comment about quitting music

One @emilyadusei on Twitter posted that her night at the club was cut short because the two music stars did not know how to act. According to her, Burna Boy ‘moved’ to Davido.

Reacting to the scuffle on social media, Davido said that he had been fighting off hate and bad blood for 10 years.

Moments after Davido tweeted that he would eventually leave the music industry, the singer was motivated to approach the matter again after reading a comment from one of his fans.