– Tottenham vs Fulham’s EPL clash will no longer hold on Wednesday, December 30

Tottenham Hotspur’s Premier League fixture against Fulham has been suspended due to the outbreak of deadly coronavirus.

The encounter was initially put in doubt after some members of staff of the Cottagers tested positive for the virus in the latest round of tests.

This has now led to the game being called off hours before kickoff while Spurs boss Jose Mourinho aimed a dig at the English topflight.

The Portuguese-born tactician laughed at the organisers over their lack of clarity regarding whether or not it would go ahead. NAIJ.com readers tell if they can live in a box for a sum of N5m

Goal reports that a statement from the Premier League confirmed the development adding that “a number of players” were showing symptoms on Wednesday, amid a “significant” rise in positive COVID-19 cases.

“The match between Tottenham Hotspur and Fulham, due to be played at 18:00 GMT this evening, has been postponed following a Premier League Board meeting this afternoon.

“Fulham lodged a request with the Premier League Board to rearrange the fixture following a significant rise in positive COVID-19 cases, as well as a number of players showing symptoms today.

Legit.ng earlier reported that Everton’s Premier League fixture against Manchester City has been postponed due to coronavirus fears.

According to reports from Sky Sports, several members of the City squad tested positive for the virus in the build-up to the clash.

Defender Kyle Walker and striker Gabriel Jesus were already confirmed to be positive cases last week along with two other members of City’s staff but several other unnamed players also contracted the virus. 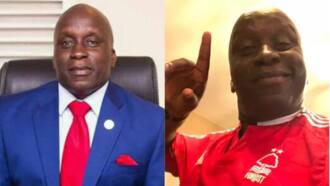 Deji Tinubu left for a better world. How did it happen?