Not many people are aware that popular Yoruba actor, Taiwo Hassan famously known as Ogogo, is happily married to two beautiful wives who practice different religions and he loves them equally just like that.

The veteran actor is known to be a devoted Muslim, a trait that shows even in movies he features in. Despite his strong religious belief, Ogogo’s first wife, Ajoke Taiwo, is a Christian while his second and young wife, Taibat Taiwo, is a Muslim.

Despite the differences in the religions, Ogogo has been cohabiting peacefully with the two women in his life and he has been according each of them the utmost respect. He was married to his first wife for over a decade before marrying another woman. 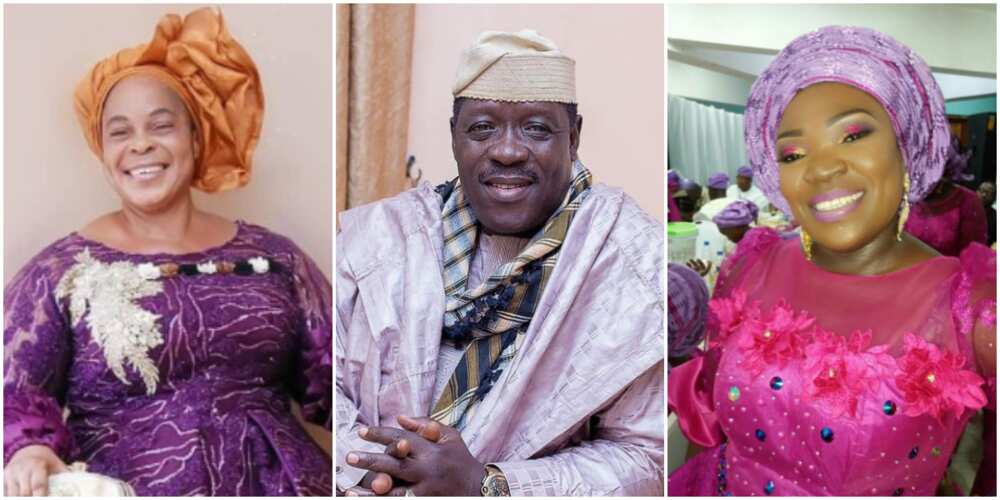 Legit.ng gathered that the famous actor’s decision to take a second wife had nothing to do with the religious difference between his first wife as the woman still enjoys a very strong bond with her husband. So committed to her religion is the Ogogo’s first wife and mother of his two daughters, Shakira and Halima Taiwo, that she does not wear any form of jewelry nor apply makeup.

So dedicated to Christianity is Ajoke that she is fondly called Iya Jesu, meaning Jesus’ mother.

Ogogo’s second wife Taibat is much younger and practises the same religion as her husband. She is a Muslim whom the actor married some years back.

Taibat has two younger sons for the actor, Khaleed Ayinde, and Fuad Alade Taiwo. Despite being the latest wife in the home, the young lady is said to always accord the older wife much respect and both women have lived together in peace and love.

Taibat also rolls well with the first wife’s daughters. She was spotted at the convocation ceremony of Halima and posed for photographs with the elder wife and her daughter too. They both share in the family’s joy.

Celebrities help Annie Idibia mourn the loss of her dad

Slide through the embedded post to see more photos:

In a related post on Ogogo’s family, the screen god who is popular for his roles in Yoruba movies celebrated his first wife and mother of his children who clocked a new age in March 2020.

Ogogo shared photos of the celebrant and accompanied them with a sweet and touching caption. According to the actor, he has made many decisions in his life, but the singular decision to get married to Ajoke Taiwo is one of the right ones he ever made.

The actor celebrated his woman and applauded her for always being by his side and going through ups and downs with him. “You have been there through the ups and down with me and still standing firm. Thanks for being who you are, I love you my darling wife. Happy birthday to you. May Allah keep the sparkle in our world intact. Love you endlessly,” Ogogo’s message read in part.