– Presidential aide, Lauretta Onochie, is insinuating that Bishop Kukah’s outburst against President Buhari is because he does not offer inducements

– According to Onochie, with Buhari as Nigeria’s leader, buying the support of traditional, religious and political leaders is no longer on the table

Kukah had in his Christmas Day message on Friday, December 25, accused the President Muhammadu Buhari administration of nepotism and incompetence.

According to him, there could have been a coup if a non-northern president did a fraction of what Buhari has done.

Onochie, in response, insinuated that Kukah’s outburst may have come as a result of Buhari refusing to part with money.

In a post on her Twitter page on Monday, December 28, she said both the president and the cleric have met a number of times and she shared photos to back her claim. 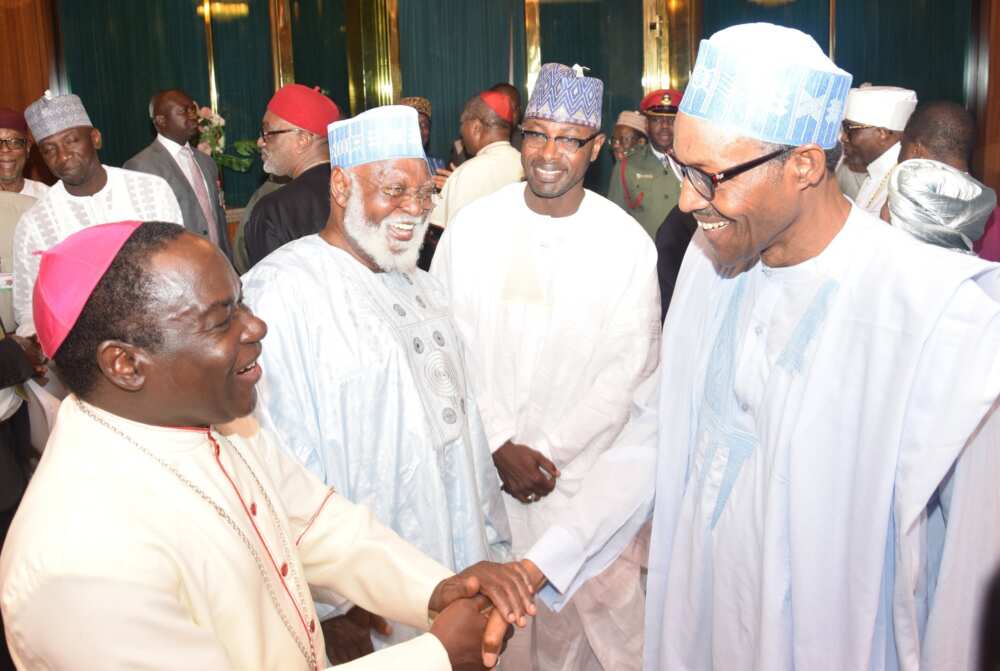 Bishop Kukah and President Buhari during one of the meetings in the past.
Photo credit: @Laurestar
Source: Twitter

According to her, President Buhari is rebuilding Nigeria which is his main focus and has no time to be buying the support of religious and traditional leaders.

“They’ve met more than once. So, what’s the problem? Baba no dey drop!

“He’s rebuilding a nation battered by greed, political and religious favours. Buying the support of traditional/religious/political leaders is no longer on the table. Rebuilding our nation is the main focus.”

Emir of Port Harcourt with the Twitter handle @WOkene wrote:

“Buhari’s continuous stinginess is fueling criticisms from people who benefited from the loopholes in government before his coming. How can traditional/religious leaders visit you and you won’t give them ordinary transport, who does that?”

“Nobody can criticise Buhari objectively without being vilified. Nobody in your world is righteous except Buhari. Criticism ought to make one sit up and try to be better not otherwise.”

In an earlier report by Legit.ng, the Arewa Youth Consultative Forum (AYCF) described Kukah’s statement as unguarded and open incitement to a military coup.

The AYCF faulted “Kukah’s use of nepotism as a weapon of calumny against the government and people of Nigeria”.

The northern group called for the arrest and prosecution of the bishop for what it described as a treasonable felony against the Nigerian state.

The Northern Elders Forum (NEF) also faulted Kukah for suggesting that the president be removed through an undemocratic process.

Legit.ng reported that the NEF said though it agrees with Kukah’s opinion that Buhari’s government lacks respect for inclusiveness, it is wrong to seek solutions to the problems outside the democratic process.

Insecurity: Will you be travelling for festivities? | Legit TV