– The Sokoto Bishop accused the president of nepotism, saying if he were to be from another tribe, Nigeria would have been at war

– In its reaction, NEF said whoever is not happy with Buhari’s government should approach the court

Bishop of Sokoto Catholic Diocese, Mathew Hassan Kukah, has come under serious attack for speaking against the government President Muhammadu Buhari in his Christmas message.

The Northern Elders Forum (NEF) faulted the cleric for suggesting that the president be removed through an undemocratic process.

Kukah, in reaction to the spate of attacks and killings in the country, had said if it was non-Northern Muslim that was president and had done a fraction of what Buhari has done, a military coup would have been carried out long ago.

The NEF in its reaction said though it agrees with Kukah’s opinion that Buhari’s government lacks respect for inclusiveness, it is wrong to seek solutions to the problems outside the democratic process, This Day reports. 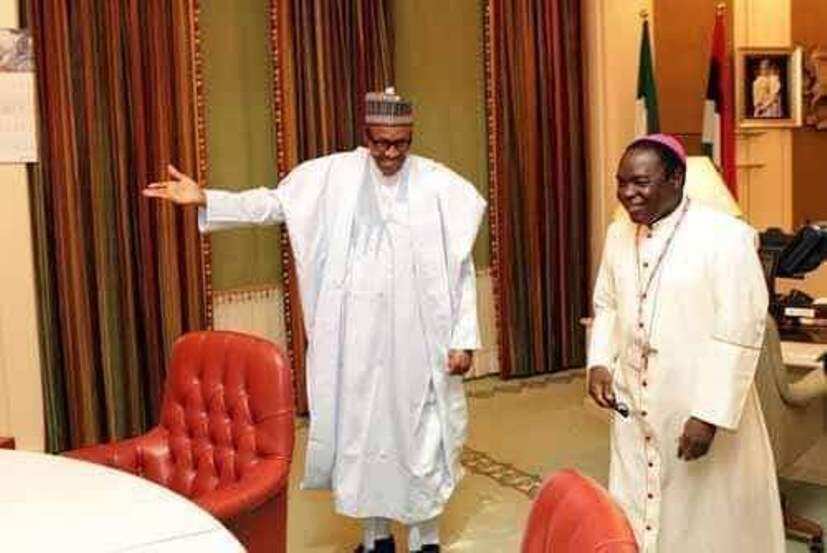 According to Dr. Hakeem Baba-Ahmed, the group’s director, publicity and advocacy, under Buhari, Nigeria is paying a heavy price for mediocrity and ineffectiveness in key areas of decision-making.

He, however, said the group is not in support of any other form of government other than one that emerges democratically.

The NEF’s spokesman said many grounds exist to Buhari’s government’s competence and sensitivity.

According to him, most people, even those in support of the president, are wishing he showed greater respect for inclusion and accountability of those he chooses to trust with power.

Baba-Ahmed, however, added that any citizen who is not happy with Buhari’s administration should seek redress in court.

According to the group, Kukah did not in any way suggest that a democratically constituted government be overthrown violently.

The minister had stated that it is unbefitting of religious leaders to fan the embers of disunity and hatred.

He warned the Sokoto bishop to desist from action that can “trigger unintended consequences.”