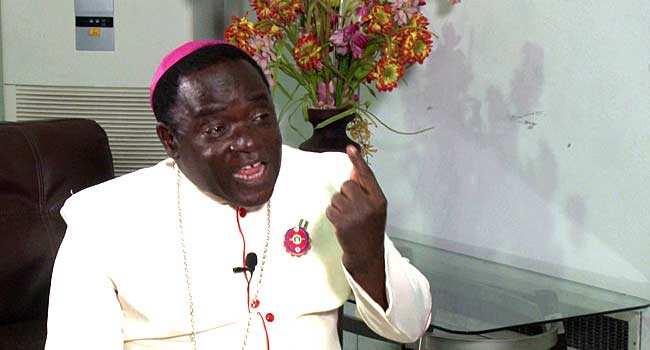 – President Muhammadu Buhari has been accused of nepotism

– According to Matthew Kukah, another president would have been overthrown if he practiced what Buhari did

– Meanwhile, his statement has received reactions from Nigerians on social media

In what might annoy the APC led federal government, Matthew Kukah, bishop of Sokoto Catholic diocese, has accused President Muhammadu Buhari of nepotism.

According to the respected cleric, there could have been a coup or war in the country if a non-Nothern Muslim becomes a president and does a fraction of what Buhari did.

The Cable reports that Kukah disclosed this in his 2020 Christmas message titled, ‘A nation in search of vindication.’

“Every honest Nigerian knows that there is no way any non-Northern Muslim President could have done a fraction of what President Buhari has done by his nepotism and gotten away with it.

Meanwhile, Nigerians have taken to social media to react to his statement with some supporting him and others faulting his stand.

Rev. Fr Hassan Kukah has always been a one-man riot squad. A lone voice crying in the wilderness. You cannot buy him over, never! As constant as the northern star. He does not wait to take orders from CAN. That one has allowed itself to be bought over.”

“I still wonder how Buhari has gotten away with all his nepotism and tyrannical actions. It’s really baffling.”

Umar Bello on his part said:

“It’s regrettable that some Nigerians are quick to shower insult on PMB on the state of affairs in the nation yet they offer no solution.”

“Political bishop go and sit down.”

Recall that Legit.ng reported that Kukah lambasted northern Muslim elite over the proliferation of Almarijis in the region.

The cleric said the Almajiris in the northern part of Nigeria have been “sinned against” and denied opportunities for social progress by the elite.

Legit.ng gathered that Kukah, who is the Bishop of the Catholic Diocese of Kaduna, said on Monday, June 8, that the Almajiri has become a scapegoat for the multiple sins of the Nigerian state in general and some Muslim elite in particular.