Christmas, an annual festival marking the birth of Jesus Christ, was held on Friday, December 25, in the country in what ushered in a remarkable feeling of excitement amid manifold challenges complicated by the COVID-19 pandemic and the security threats.

But while many Nigerians took the Christmas avenue to reunite with family members and distanced relatives, prominent Nigerians held theirs behind the bar of Nigerian correctional centres.

Those Nigerians are either been convicted or standing trials over one charge or the other over gross corruption misappropriation of funds, alleged treason and other reasons.

Legit.ng highlights the Nigerians who could not celebrate Christmas with their families. 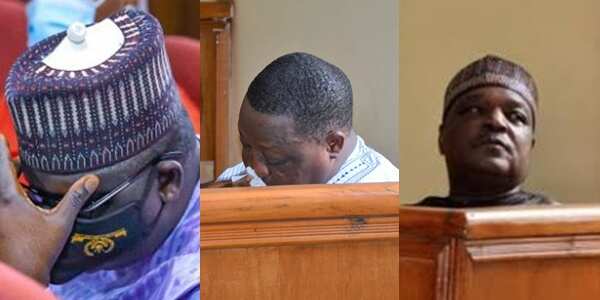 Maina was returned to the prison following his arrest all thanks to the collective efforts of the Nigerian police and the authorities in Niger Republic where he ran to months after jumping bail.

A former chairman of the now-defunct Pension Reform Task Force Team (PRTF), Maina is facing a 12-count money laundering charge levelled against him and a firm by the Economic and Financial Crimes Commission (EFCC).

He was made to face and continue his trial on Thursday, December 10, where he collapsed at a Federal High Court sitting in Abuja.

That, however, did not stop him from being sent back to jail as his trial continues.

The leader of the Islamic Movement in Nigeria (IMN) has been put behind the bar since 2015 when he was arrested alongside his wife Zeenat following his followers’ violent confrontation with the operatives of the Nigerian Army, leading to death of many.

Although many court pronouncements have ordered his immediate release, the Shiite leader and his wife are still being remanded behind the bar by the federal government.

Unfortunately, Friday, December 25, 2020, will be the sixth Christmas Sheykh El-Zakyzaky will be spending in detention.

A former Governor of Plateau, Joshua Dariye was sentenced to jail in June 2018 after he was convicted for N1.126 billion fraud.

A Federal Capital Territory (FCT) High Court in Abuja had sentenced him to 16 years but the judgment was reduced to 4 years by the court of appeal with no option of fine.

In 2007, the EFCC charged him with money laundering and accused him of diverting the amount from the Plateau government’s ecological fund through Ebenezer Reitner Ventures, an unregistered company.

Jolly Nyame is a former Governor of Taraba state who was charged for fraud of N1.64 billion in 41 counts of fraud by the anti-graft commission, EFFC.

The former governor, in 2007, admitted to misappropriating N180 million out of N250 million meant for stationery in Taraba.

Although he offered to return the amount, Nyame was convicted by the High Court of the Federal Capital Territory, Abuja and was sentenced to 14 years in prison.

In the judgement passed by Justice Adebukola Banjoko on May 30, 2018, he was also asked to refund the monies he diverted.

Top 4 corruption cases: Maina back in the limelight | – on Legit TV