Bukayo scored the goal of the match as Arsenal returned to winning ways following their 3-1 win over Chelsea in the London derby.

The 19-year-old chipped the ball over Edouard Mendy in goal which looked like he was attempting a cross as the ball dropped into the back of the net.

But the England international has dismissed suggestions that his wonder-goal was a mere fluke after the replay showed he spotted Alexander Lacazette in the box before making the attempt. 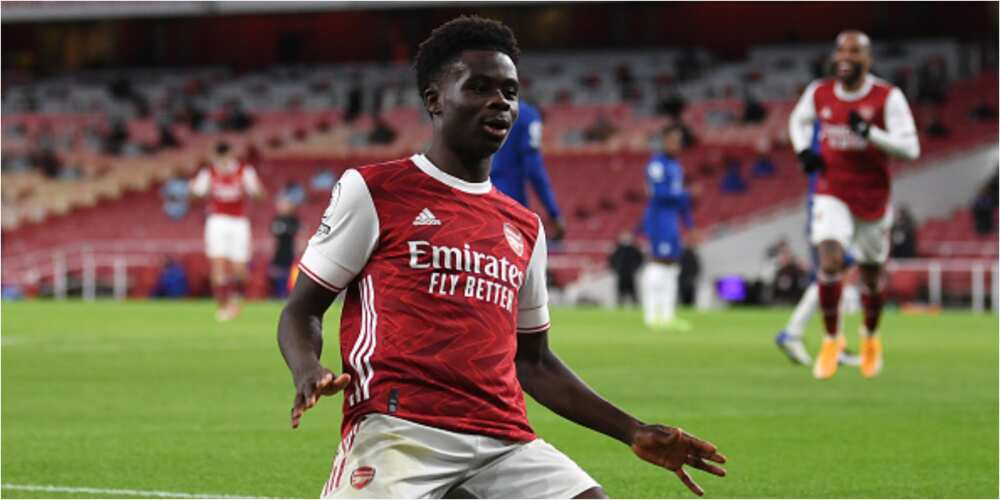 Bukayo Saka claims his wonder-goal against Chelsea at Emirate is no fluke.
Photo by David Price
Source: Getty Images

“I saw him off his line so I thought I could chip him.”

On the Gunners’ performance against Chelsea Saka added:

“We feel that we are a good team who have been unlucky with results and red cards but this is a big one for our confidence. It’s been tricky, tough, but we have come out of it and we are trying our best.

“We grew up with each other, the young players all want to play and have the passion for this club. We want to make the fans happy.”

The former Chelsea striker claimed Saka was attempting a cross while Gunners’ legend Wright believed the youngster was right to have spotted the goalkeeper off his line.

Mikel Arteta’s side moved a step up to 14th on the Premier League following the win and would be looking to build their confidence going into the games against Brighton and West Bromwich Albion.

Meanwhile, Legit.ng had earlier reported that Arsenal spectacularly bounced back to winning ways following their famous 3-1 win over Chelsea at the Emirates.

The Gunners who have failed to record a win in their last ten matches stunned Frank Lampard’s men at their home turf.

Alexander Lacazette, Granit Xhaka and Bukayo Saka scored for Arsenal while a consolation from Tammy Abraham was not enough to bring the Blues back into the game.